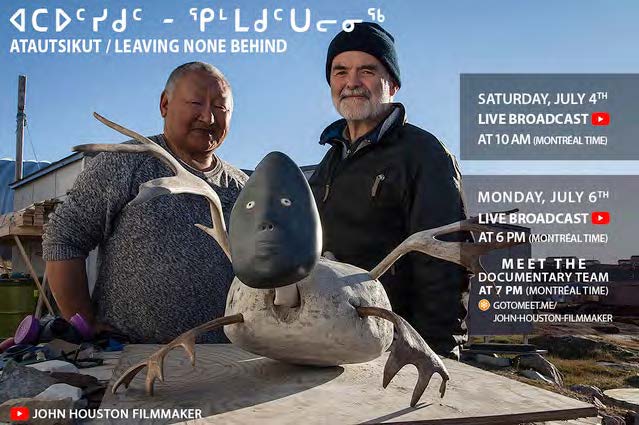 Click here for a pdf version of this information available

After Monday’s première online screening, starting at 7:00pm ET, you’ll be able to share questions and comments with director John Houston, which he’ll be happy to address.
Webinar: https://gotomeet.me/John-Houston-filmmaker

Synopsis: Inuit and Cree of Nunavik (Northern Québec) recount how they escaped the economic oppression of the Hudson’s Bay Company. Overcoming tremendous challenges, in 1959 they founded a co-operative; then other communities followed suit.
Today, the federation they created contributes as part of Nunavik’s co-operative movement, with accumulated assets exceeding half a billion dollars! Drawing on their traditional values, Inuit and Cree teach us something of real value today: how to put social development at the heart of everything – including a successful business!
Building prosperity, yet “leaving none behind.”
Trailer: https://www.youtube.com/watch?v=QEgf5v967RM
Video “Selfie” Invitation: https://www.youtube.com/watch?v=NwNLOkTAxq8
John Houston Filmmaker YouTube Channel: https://www.youtube.com/channel/UCQO9G6cdq96ByCJwQ_DKo_g

Background: In 2018, the Federated Co-ops of Northern Quebec celebrated 50 years of success coming out from under the economic oppression of colonialism. John Houston, whose parents helped found the cooperative movement in the Baffin Region of Nunavut, and who grew up in the Inuit culture, was invited to make a film about this great story of empowerment. The Nunavik co-operative movement is composed of 14 cooperatives owned and operated by Inuit and Cree, offering a multitude of services to the community: general store, hotel, gas-station and fuel distribution, post-office, cable TV, restaurant, etc. It is also a federation, “Ilagiisaq," which supports the co-operatives since 1967, all the while being active in various economic sectors: marketing of Inuit art, tourism, logistics management, construction, energy and transport. The movement is composed of over 11,000 members and 1,100 employees, of which 800 work in the North.
“I believe what you have filmed will be important for our grandchildren and our children. Back when there was nothing in all of Nunavik... those who came before us, those who founded the co-operatives and the Federation… they started out with nothing but their determination.”
- Aliva Tulugak, Past President, Fédération des coopératives du Nouveau-Québec