This series was created to disseminate core documents on Canadian Arctic sovereignty and security for use by the academic community, students, and policy makers. These e-books are edited summaries and document compendiums, compiled as research tools to serve as a basis for in-depth research. The volumes contain summaries or transcriptions of key primary source material – from policy statements and pronouncements to internal memoranda and declassified assessments.

Material in these volumes is in the public domain and can be used and cited freely, though the volume from which they are retrieved should be appropriately acknowledged. Citation information can be found on the inside cover of each volume. This series is made possible through support from the Centre for Military, Security and Strategic Studies (CMSS), the Centre on Foreign Policy and Federalism (CFPF), and the Social Sciences and Humanities Research Council of Canada (SSHRC) Insight Grant program. 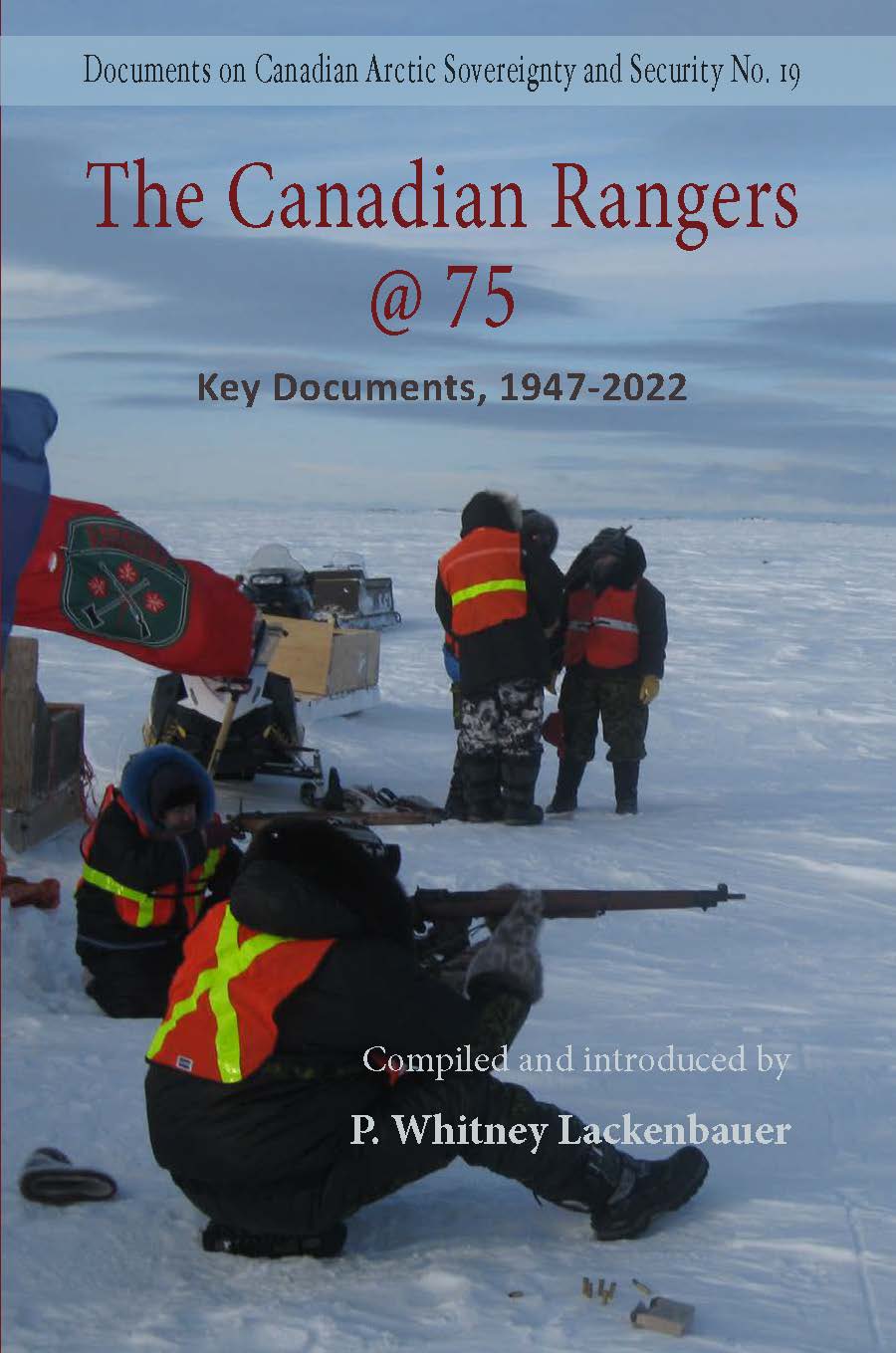 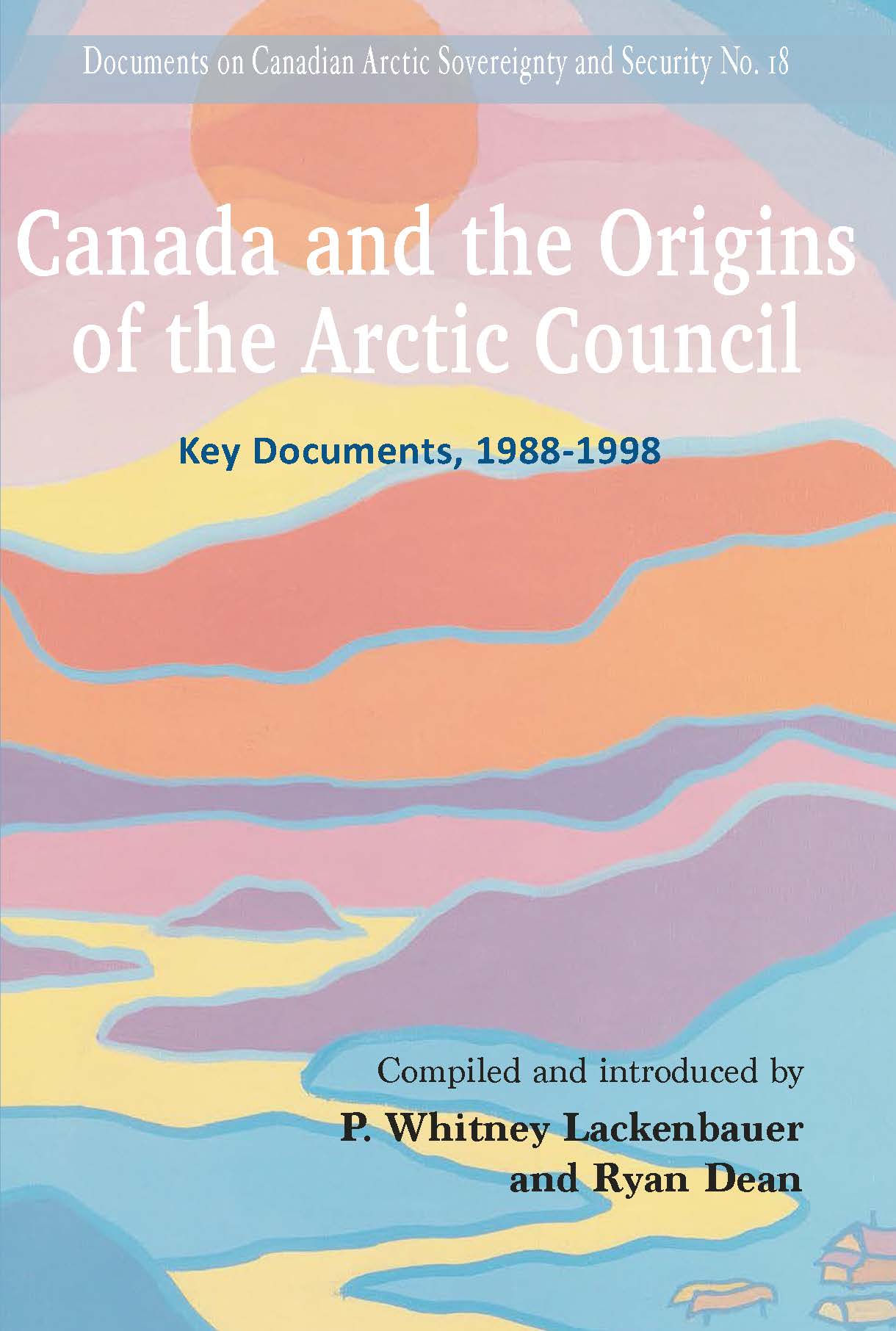 Canada and the Origins of the Arctic Council: Key Documents, 1988-1998 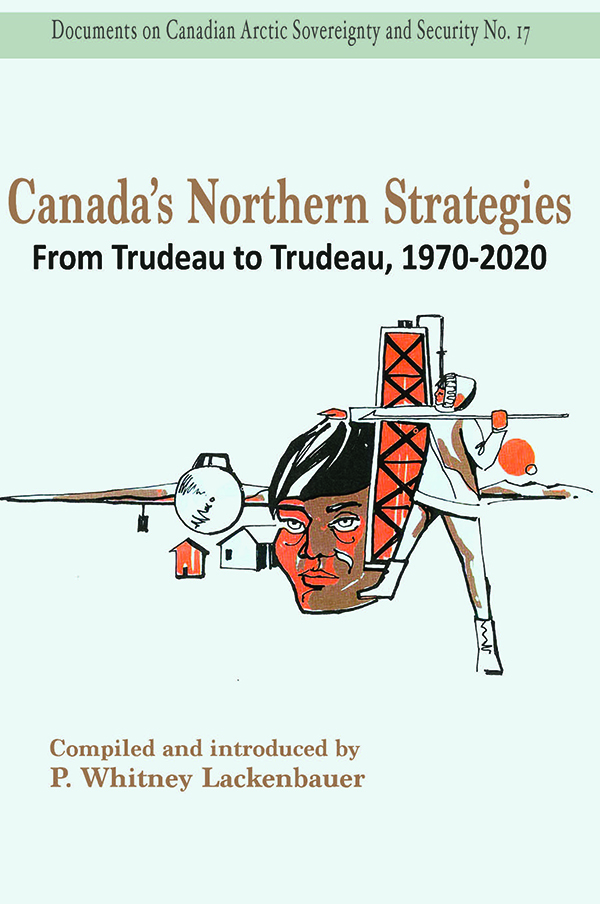 By reproducing several key Arctic and Northern strategy documents and statements over the last fifty years, and encouraging that they be read together, this collection encourages deeper consideration of continuities in how federal political leaders have framed Northern policy issues, strategic agendas, and priorities. These documents also reveal evolving relationships with Northern Canadians, particularly Indigenous peoples, as well as desired futures for the region – and for Canada more generally. 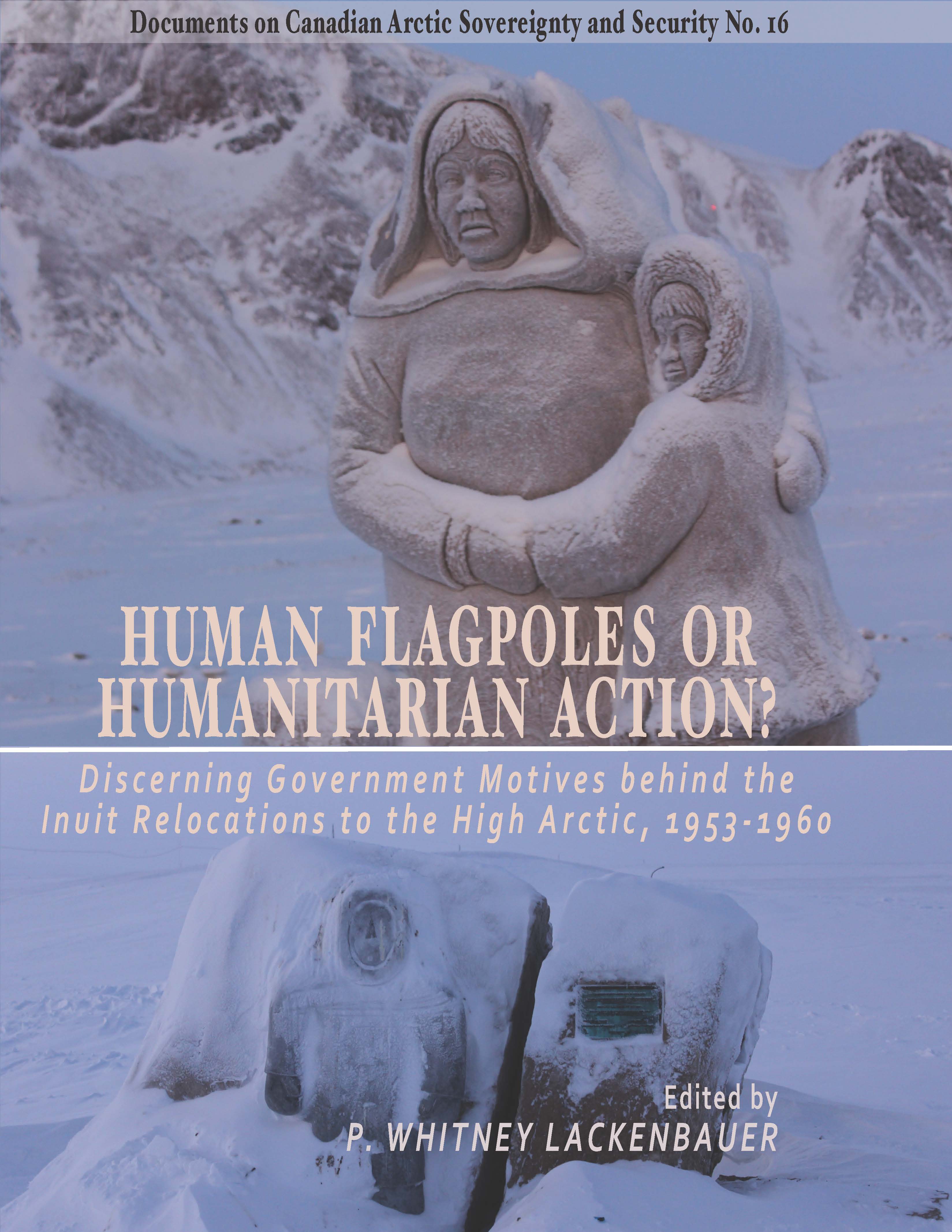 Human Flagpoles or Humanitarian Action? Discerning Government Motives behind the Inuit Relocations to the High Arctic,
1953-1960

In 1953, the Government of Canada resettled seven families from the Inukjuak (Port Harrison) area in northern Quebec and three families from Pond Inlet to new High Arctic communities at Resolute Bay on Cornwallis Island and at Grise Fiord on Ellesmere Island. This volume makes various research reports, offering differing interpretations on government motivations behind these controversial relocations, available to the public and provides essential background to understand the Government of Canada’s 2010 official apology for the Inuit High Arctic relocation. 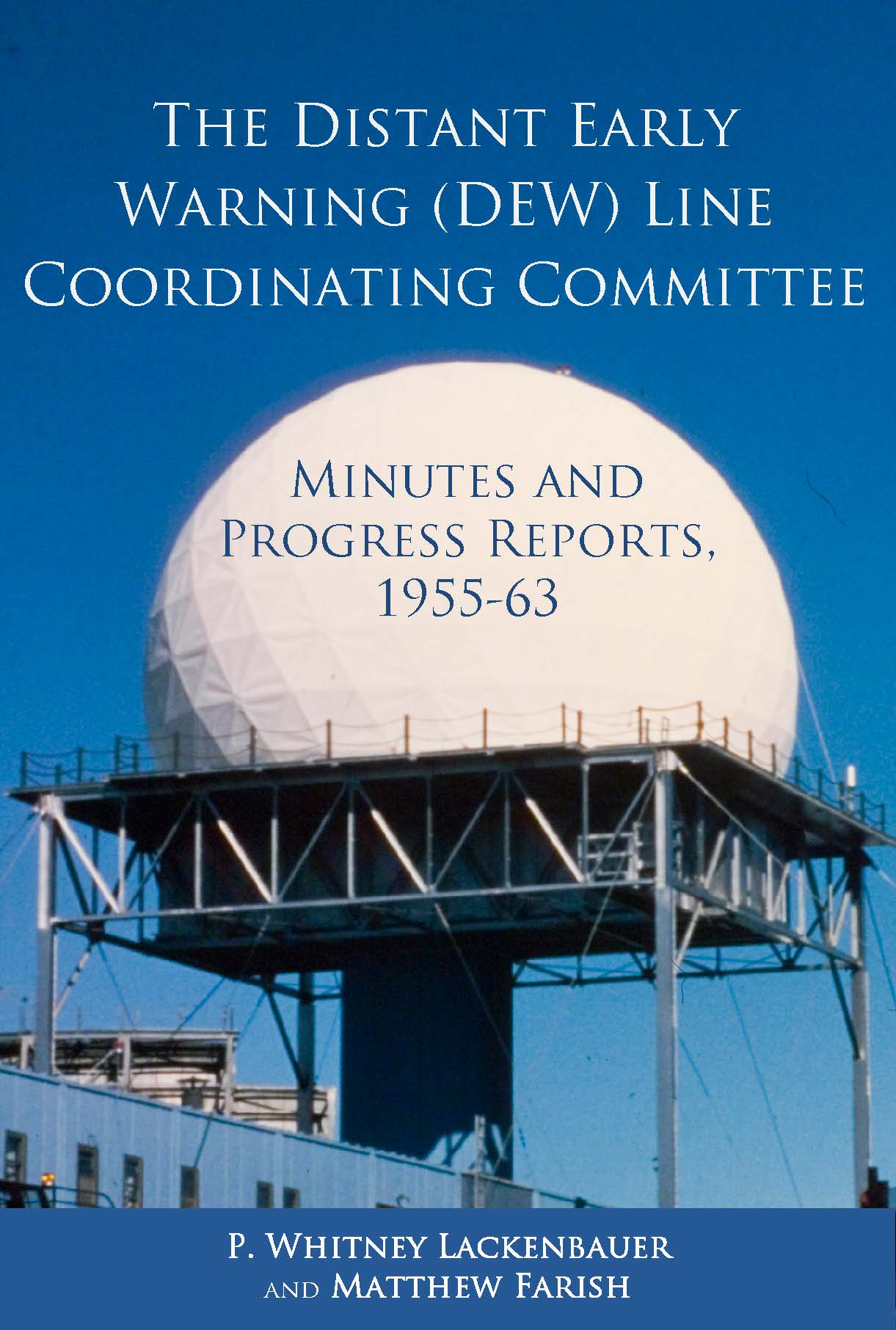 The construction of the Distant Early Warning (DEW) Line in the mid-1950s represents the most dramatic example of military modernization in the Canadian Arctic. To ensure that a range of federal government stakeholders were informed about and engaged in this megaproject, the DEW Line Co-ordinating Committee was established in February 1955 and ran until 1963. The meeting minutes and the regular progress reports provided to the committee offer valuable insights into the logistical and administrative machinery behind the “great assault” on the Canadian Arctic and its transformative effects on the human population in the region. 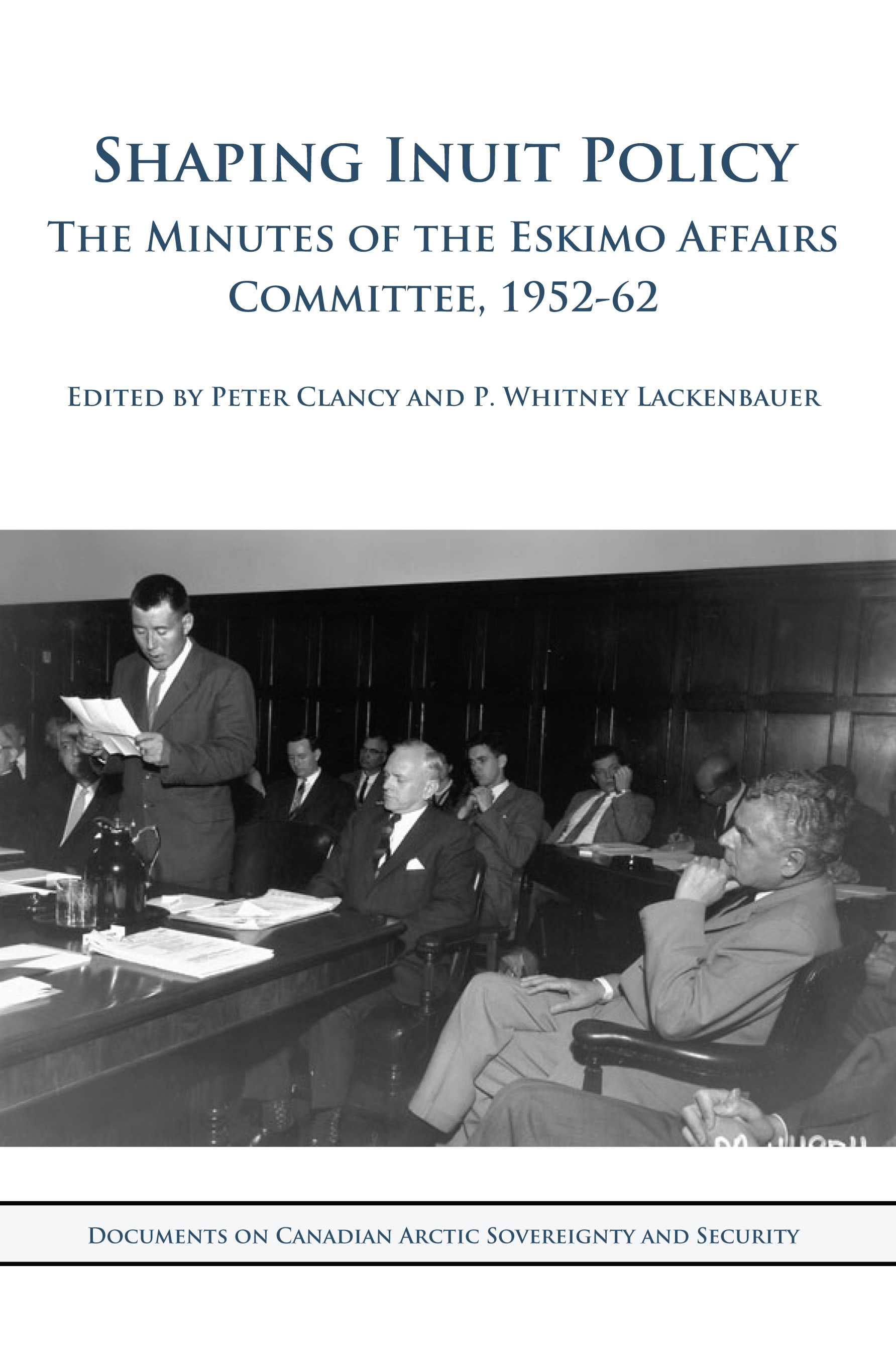 Shaping Arctic Policy: The Minutes of the Eskimo Affairs Committee, 1952-62

During the 1950s, the Eskimo Affairs Committee played a significant role in shaping a new set of policy initiatives that Ottawa was framing toward Inuit. The record of the committee’s activities offers important insight into development-administration in-the-making, covering a wide swatch of issues from education to health care, the case for a new field administration, proposals for expanded credit channels, and measures to extend the scope of wage employment and small manufacturing. This volume is a documentary history of Canadian Arctic maritime policy, with a particular focus on the Northwest Passage. Using government memoranda, reports, and correspondence, it charts the evolution of Canada’s Arctic sovereignty during its formative years in the 1950s, through the Cold War and across the many challenges which successive Canadian governments faced in defining and asserting Canadian sovereignty. Using this original material, it tracks the country’s changing legal assessments, political concerns, and the place of the Arctic within Canada’s much broader position on the law of the sea. Ultimately, this volume offers readers a glimpse at the policies and practice that defined the Northwest Passage as Canadian and continue to underly Canadian policy into the 21st century. Captain Thomas Charles Pullen (1918-1990), also known as “Pullen of the Arctic,” became a noted authority on and explorer of the Arctic after he took command of the naval icebreaker HMCS Labrador in 1956. After his thirty years of active naval service, Pullen served as an advisor and consultant to government and industry on arctic marine operations for another twenty-four years, earning the reputation as North America’s foremost expert on Arctic navigation and icebreaking. This volume reproduces key diaries and reports on Arctic operations that Pullen wrote in various official capacities over his career. The first part documents his role as the commanding officer of the Labrador during operations in the Canadian Arctic in 1956 and 1957. The second part reproduces his observations as the Government of Canada’s official representative onboard the icebreaking tanker Manhattan during its two transits of the Northwest Passage. From Polar Sea to Straight Baselines: Arctic Policy in the Mulroney Era

In 1985, the government of Prime Minister Brian Mulroney announced the drawing of straight baselines around the Canadian Arctic Archipelago, defining the full extent of the country’s Arctic maritime sovereignty and enshrining that sovereignty in legislation for the first time. This decision was a reaction to the voyage of the US Coast Guard icebreaker Polar Sea through the Northwest Passage that summer, an expedition that both sparked a political crisis and led to years of negotiations between Canada and the United States to settle the precise status of the northern waters. This volume contains documents surrounding that policy shift and the subsequent negotiations, which students, academics, and policy makers can use to chart the development of Canadian policy and Canadian-American relations in the Arctic. From this, readers can gain a greater understanding – not only of Canadian history – but of the nature of Canadian Arctic policy, and why it exists in its present form. Northern Skytrails: Perspectives on the Royal Canadian Air Force in the Arctic from the Pages of The Roundel, 1949-65

This volume examines the role of the Royal Canadian Air Force (RCAF) in the Arctic through the pages of The Roundel, the service magazine that ran from 1949-65. Readers will gain a deeper appreciation of the air force’s efforts to develop a greater sense of Arctic “air-mindedness” in the early Cold War through articles explaining the history of the RCAF’s engagement in the Arctic and Subarctic, lessons observed during postwar operations, life at isolated stations, and roles in continental defence. Access to these insights (which span from resupply missions to social relations with host communities and indigenous peoples) remains important today, when the RCAF is being called upon to prepare to respond to safety and security challenges in an increasingly complex Arctic region. This volume brings together archival documents and newspaper reports related to the landmark 1923 trial of Alikomiak and Tatamigana, the first Inuit tried and executed for murder under Canadian law. This show trial, designed by the federal government to show the Inuit that authorities would no longer tolerate acts of violence, was meant also to demonstrate Canada’s Arctic sovereignty to the world. The conviction and execution of Alikomiak and Tatamigana caused controversy at the time, and this volume encourages further discussion and debate about the legal aspects of the case, the media coverage of it, and the interactions between the legal cultures of Inuit and the Canadian state. In 1953, the Government of Canada announced plans to resettle Inuit from areas of dwindling food resources to the High Arctic where game and fur animals were reported in abundant supply. That August, seven families from the Inukjuak (Port Harrison) area in northern Quebec and three families from Pond Inlet were resettled in communities at Resolute Bay on Cornwallis Island and at Grise Fiord, near the Craig Harbour police post on Ellesmere Island. This volume makes Shelagh Grant’s important interpretations and research on these controversial relocations available to the public and provides essential background to understand the Government of Canada’s 2010 official apology for the Inuit High Arctic relocation. The documents in this volume provide insights into the Canadian Army’s attempts to secure a better knowledge of the characteristics of Northern operations during the Second World War and early Cold War. An extensive series of Subarctic and Arctic training exercises yielded valuable “lessons learned” that informed the planning, training, and equipping of the Army for Northern missions. The challenges encountered in these operations, the questions raised, and the lessons observed remain remarkably consistent with those experienced during Arctic deployments over the last decade. Canada’s Northern Strategy under the Harper Conservatives: Key Speeches and Documents on Sovereignty, Security, and Governance, 2005-15

The speeches and media releases collected in this volume help to reveal the narratives on Arctic sovereignty, security, circumpolar affairs, and governance that the Harper Government sought to construct during its near-decade in office.  While the government touted its own achievements in regular updates on its Northern Strategy, other commentators have been more critical, suggesting that either the government’s priorities were misplaced or it promised more than it delivered. This volume is intended to preserve these primary resources for researchers to facilitate ongoing debate and discussion. Ice islands are large rafts of multi-year ice that are carried by currents around the Arctic Ocean. They became politically significant in the early 1950s when American and Soviet research parties began occupying them. This activity called into question their legal status and highlighted the uncertain nature of polar maritime jurisdiction. This volume tracks the evolution of Canadian policy vis-à-vis ice islands and examines how the politics surrounding these bodies influenced the country’s broader position on Arctic maritime sovereignty. 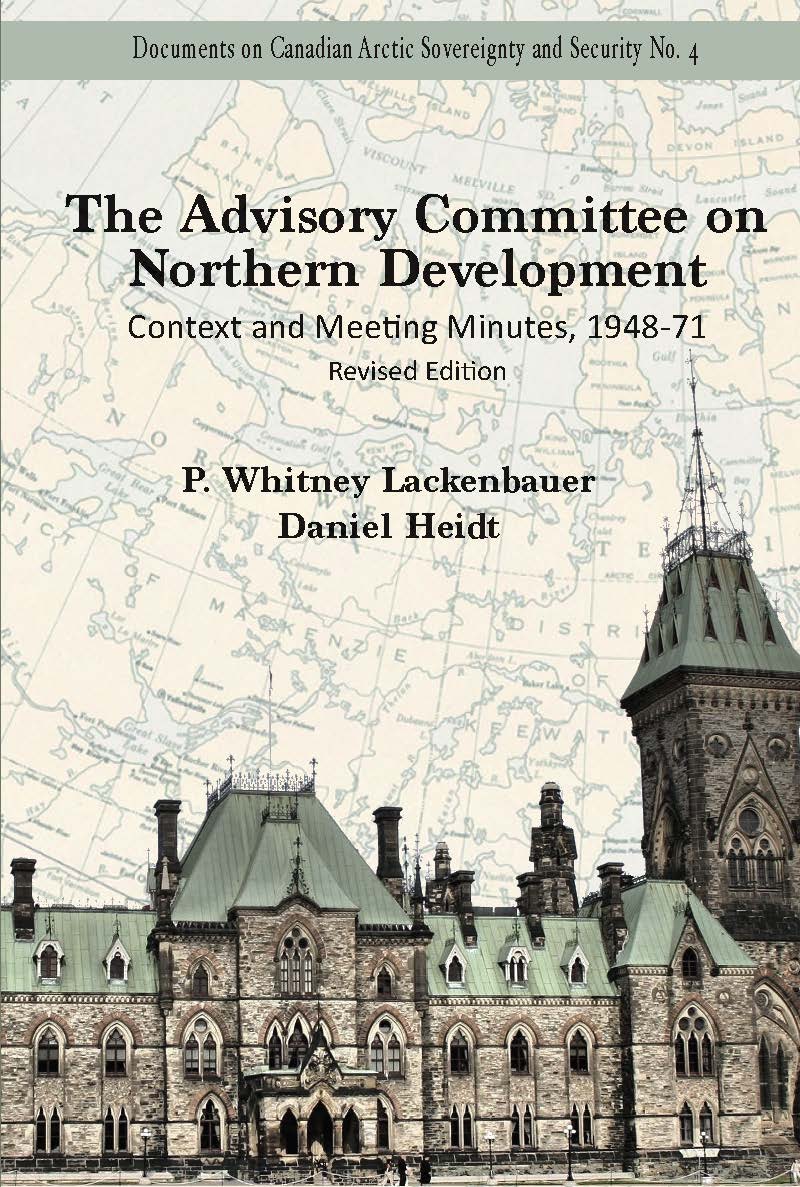 The Advisory Committee on Northern Development: Context and Meeting Minutes, 1948-71

The Advisory Committee on Northern Development (ACND), a high-level interdepartmental committee, was responsible for coordinating federal Arctic policies and programs from 1948-1971. The minutes of its main meetings provide unparalleled insight into how high-ranking civil servants in Ottawa grappled with what they perceived to be the most pressing issues of the era, including Canadian-American relations, sovereignty, security, Aboriginal affairs, socio-economic development, scientific research, and governance. As this volume reveals, the ACND represented an early example of the “Whole of Government” approach to policy deliberations, revealing the myriad activities that constituted the “Arctic revolution” during this pivotal quarter-century. Unfurling the Air Force Ensign in the Canadian Arctic

This collection documents the role of Canadian Air Force and Royal Canadian Air Force in the opening of the Arctic during the interwar period, reproducing the landmark reports by Major Robert A. Logan (1922) and Flight Lieutenant Thomas A. Lawrence (1928). This collection documents how Canadian, American and British legal experts attempted to untangle the complex sovereignty knot in the Arctic Archipelago from 1905-56. While Canadian legal appraisals form the foundation of this collection, British and American documents offer important insight into Canada’s legal title and its general approach towards Arctic sovereignty. This volume is a synthesis and analysis of Canadian government documents on the subject of Arctic defence from 1970 to 2013. It focuses on policy papers, committee reports, public addresses, and other publicly available material. It is designed for researchers focusing on the evolution of Canadian defence policy and priorities in the Arctic.

P. Whitney Lackenbauer, Ph.D., is a professor in School for the Study of Canada and Canada Research Chair (Tier 1) in the Study of the Canadian North at Trent University, as well as a fellow with the Arctic Institute of North America.

Ryan Dean, M.A., is a PhD candidate in the department of political science at the University of Calgary.

While these volumes are designed to be as comprehensive as possible, they should not be taken as complete records. There is an immense volume of documentation on the subject of Arctic sovereignty and security and the editors of each volume include only what they consider to be the most relevant items. Each volume is subject to revision, and new material will be added to keep the series as comprehensive as possible through subsequent editions.